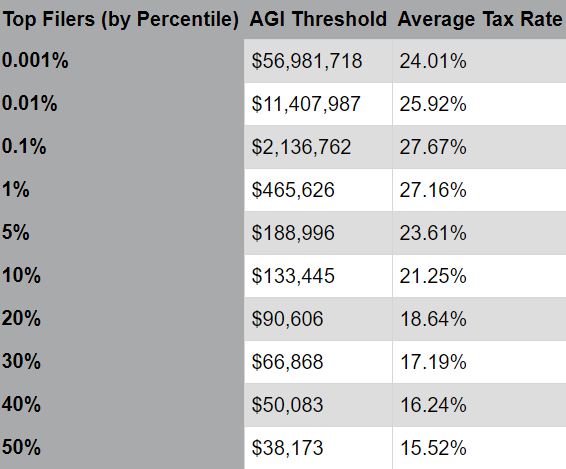 Where do you fit in?

Every quarter, the Statistics of Income Division of the Internal Revenue Service (IRS) publishes financial statistics obtained from tax and information returns that have been filed with the federal government. Recently published reports reflect data gleaned from 2014 individual federal income tax returns. These reports offer a snapshot of how the U.S. population breaks down as taxpayers.

For 2014, U.S. taxpayers filed roughly 139.6 million individual income tax returns.1 Total adjusted gross income reported on these tax returns was $9.71 trillion, resulting in a total income tax of $1.37 trillion. That works out to an overall average tax rate of 14.16% for all returns filed — the highest total average rate in the 10-year period represented by the statistical report.

A look at the top

How much AGI did it take to make the top 10% of all individual filers? Probably not as much as you might think. If your AGI was $133,445 or greater, you would have been one of the almost 14 million filers making up the top 10%. This group reported about $4.58 trillion in AGI (more than 47% of all AGI reported) and accounted for about 70.9% of total individual income tax for the year.

To make the top 5%, you would have needed $188,996 or more in AGI. You would have been among approximately 7 million filers who reported almost $3.5 trillion in total AGI and accounted for about 60% of total income taxes paid.

It's also worth noting that the top 3% of all 2014 individual income tax returns based on AGI accounted for 52.9% of total income tax paid for the year.

Not all high-income returns showed tax

Why did these high-income returns show no U.S. tax liability? The IRS report noted that these returns show no tax for a variety of reasons, including tax credits and deductions, most notably miscellaneous deductions and deductions for charitable contributions, medical and dental expenses, and investment interest expenses. A significant secondary factor was the deduction for taxes paid.

1Excludes returns filed by dependents; based on final estimates for 2014 reported in Spring 2017 Statistics of Income Bulletin

This article was prepared by Broadbridge Advisor Solutions.